In this episode: As we're getting ready to celebrate the 45th Anniversary of the Haunted Mansion, in this episode we take a look at the history of our beloved ghost house!

Re: The PG-14 rating of this episode. We gave this episode a higher rating than normal because during a story we are telling about Rolly Crump there is an explicit word that might offend some parents or children listening. If you are listening with children and would like to skip this word, it is said at 22:33 in the podcast.

This was such a fun episode! As we’re getting ready to celebrate the 45th Anniversary of the Haunted Mansion, in this episode we take a look at the history of our beloved ghost house! From the idea of a ghost house on Main Street to the Victorian Mansion in the bayou today.

Here are the two concept sketches that Harper Goff and Ken Anderson created are pictured below: 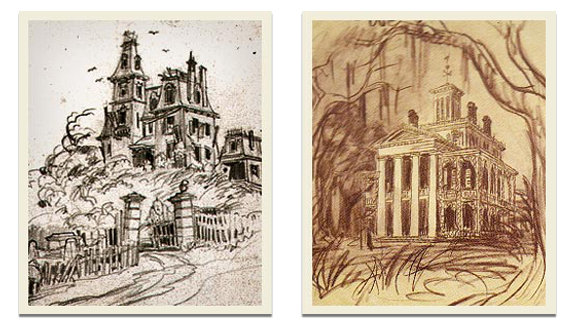 Photos from Doombuggies.com; Image on left by Harper Goff; Image on right by Ken Anderson

The story mentioned in the intro is called Nuptial Doom and can be purchased on Amazon by clicking on the image below. It’s a great story and worth a listen!

One of the best resources on the Haunted Mansion is Doombuggies.com. If you haven’t been there, check it out. There is a lot of history there and also worth taking a look at! Although it’s not the only resource available, it’s the one that really got me (Heyzen) interested in the history of the mansion. Once Jeff’s new book is available on Amazon, we’ll also link to it here.

Rolly Crump and Jeff Heimbuch’s book It’s Kind of a Cute Story is also available on Amazon by clicking on it’s image below. There are several volumes available now as audio files that are also a really good listen including a whole volume on the Museum of the Weird! You can also find the entire comic series of Seekers of the Weird as a hardcover on Amazon by clicking the image below:

You can check out my personal blog post about meeting Rolly at the Seekers signing here:

The photo below of the Hatbox Ghost is the one that Mario shows Javier. I actually misspoke in the episode when I said that “HBG” (as the cool kids call him) was there for about 3 days when, according to the Doombuggies website, it looks like he was actually there for almost a month. 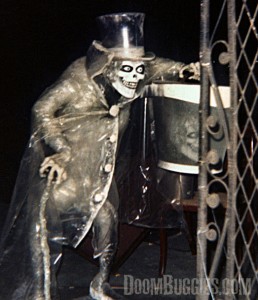 Contributed to Doombuggies.com by Paul Clemens

If you want to read a more comprehensive version of the story of the Haunted Mansion, this is a great place to start. Beware through, you’re going to spend hours, no… days… nay! You will spend months researching and reading because you may love everything that you find. You have been warned: