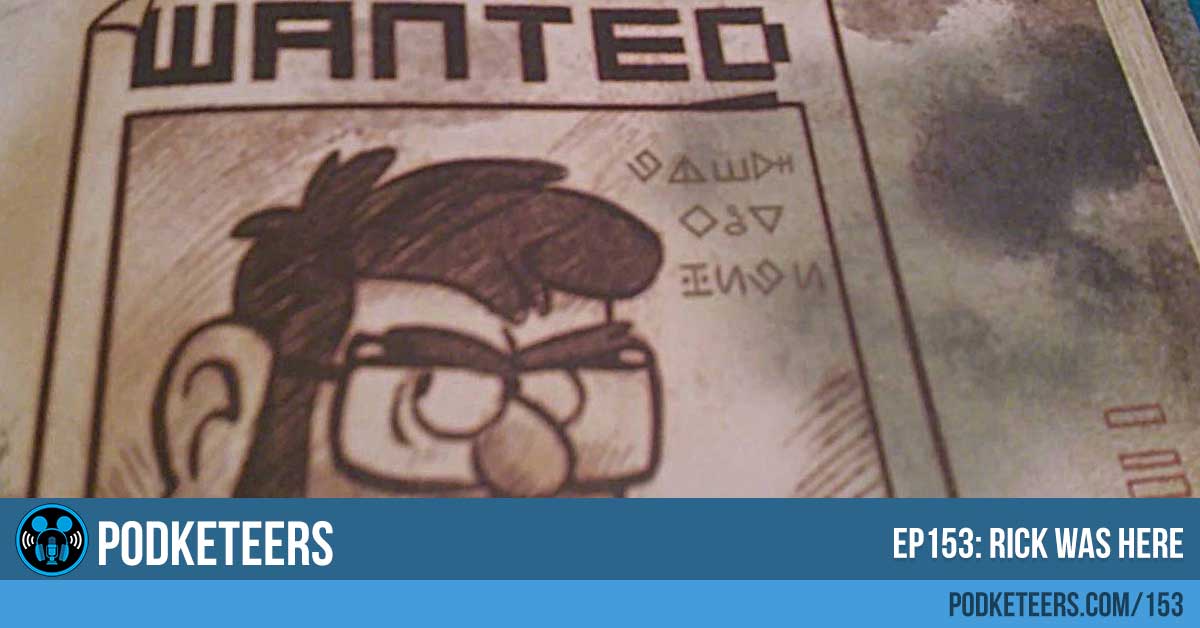 In this episode: In this episode we talk about an upcoming live version of The Little Mermaid coming to ABC this fall. The Wizard World of Harry Potter gets its own night time show opening this June, the possible relationship between the shows Gravity Falls and Rick and Morty, and a recent article called 'How Pixar Lost Its Way'.

This fall ABC will be putting on their own live musical as they present The Wonderful World of Disney: The Little Mermaid Live! on Oct 3. We love the fact that this being branded as a Wonderful World of Disney special but feel it may have been better suited as a Sunday “family” evening show instead of a Tuesday night. As of now we don’t know if Alan Menken will be performing live for the special but we know that the Academy Award winning music that he produced with Howard Ashman for the animated feature will be a part of the production.

Disney is also stepping up their live TV musical game by adding animation to the mix.  ABC stated that the Little Mermaid Live!:

It sounds like we might be getting a similar experience to the one currently at the Frozen Live at the Hyperion at California Adventure and that sounds exciting! Although no official cast has been announced many sites have already started dream casting so we’ll ask you the same: Who would you cast for Ariel, Sebastian, and Ursula? Leave your comments down below!

When the Wizarding World of Harry Potter opened at Universal Studios in Hollywood many gathered to see what was in store. Over a year later one thing that still stands out in our minds is the amazing 3D pojections over Hogwarts castle. Universal looks to solve the dilemma of not having a night time show in that area with a new 5-minute show opening June 23, 2017 set to music composed and directed by John Williams. The show will be very similar to the show that opened the area and that means that we’re excited about what is in store for this new show. If you missed that show, we found this clip on YouTube for your enjoyment!

So, we’re ashamed to say that we hadn’t really paid much attention to this theory/easter egg but as Gravity Falls fans we had to make sure to talk about it. For several years a theory has gone around that Gravity Falls and and Rick and Morty are happening (almost) simultaneously. The theory goes back an episode of Gravity Falls (S2, E7: Society of the Blind Eye) where Grunkle Stan is working on fixing his hidden universal portal when it sucks in a pen, a mug and a notepad. Those same 3 items later appear to be popping out of a portal in an episode of Rick and Morty (S1, E10: Close Encounters of the Rick Kind). More impressive is that there is also a Bill Cipher easter egg in Rick and Morty! Below is the video that we talked about on the podcast.  Take a look at it and let us know what you think in the comment section below!

NOTE: Please keep in mind that Rick and Morty is a slightly cruder show that Gravity Falls so advise some discretion while watching with (or around) kids.

Recently an article in the Atlantic caught our attention because it was titled (and claimed) “How Pixar Lost Its Way”. The article written by reporter, Christopher Orr, boldly makes statements like:

The painful verdict is all but indisputable: The golden era of Pixar is over. It was a 15-year run of unmatched commercial and creative excellence, beginning with Toy Story in 1995 and culminating with the extraordinary trifecta of wall-e in 2008, Up in 2009, and Toy Story 3 (yes, a sequel, but a great one) in 2010. Since then, other animation studios have made consistently better films. The stop-motion magicians at Laika have supplied such gems as Coraline and Kubo and the Two Strings.

Many of Orr’s claims come from his belief that Disney has strong-armed the folks at Pixar to make sequels for the sake of renewing the ineterest of a franchise to a younger park and merchandise synergy. Both John Lasseter (CEO of Pixar Animation Studios, Walt Disney Animation Studios, and DisneyToon Studios) and Ed Catmul (President of Pixar and Walt Disney Animation Studios) have denied those claims. This is not the first time Orr has voiced this opinion. In a 2014 article called “Is Pixar’s Run of Greatness Over?” he shares a lot of the same opinions as his recent article after the announcement of Toy Story 4  where he talks about:

You can read both articles by clicking on the links below:

Is Pixar’s Run of Greatness Over?
https://www.theatlantic.com/entertainment/archive/2014/11/is-pixars-run-of-greatness-over/382508/

Inversely, a rebuttal surfaced on the site ‘Inside the Magic’ by Mick Mack in his article “How Pixar Hasn’t Lost Its Way”. Mack argues that Pixar actually has a pretty good track record when it comes to sequels (especially when it comes to Toy Story).  It’s a great response that you can read by clicking on this link:

How Pixar Hasn’t Lost Its Way

We’d love to hear what you have to say about these articles! Let us know in the comments section below if you side with one or the other.

If you like to read check out Audible! Get 1 free audiobook and a 30-day free trial by going to audibletrial.com/podketeers.