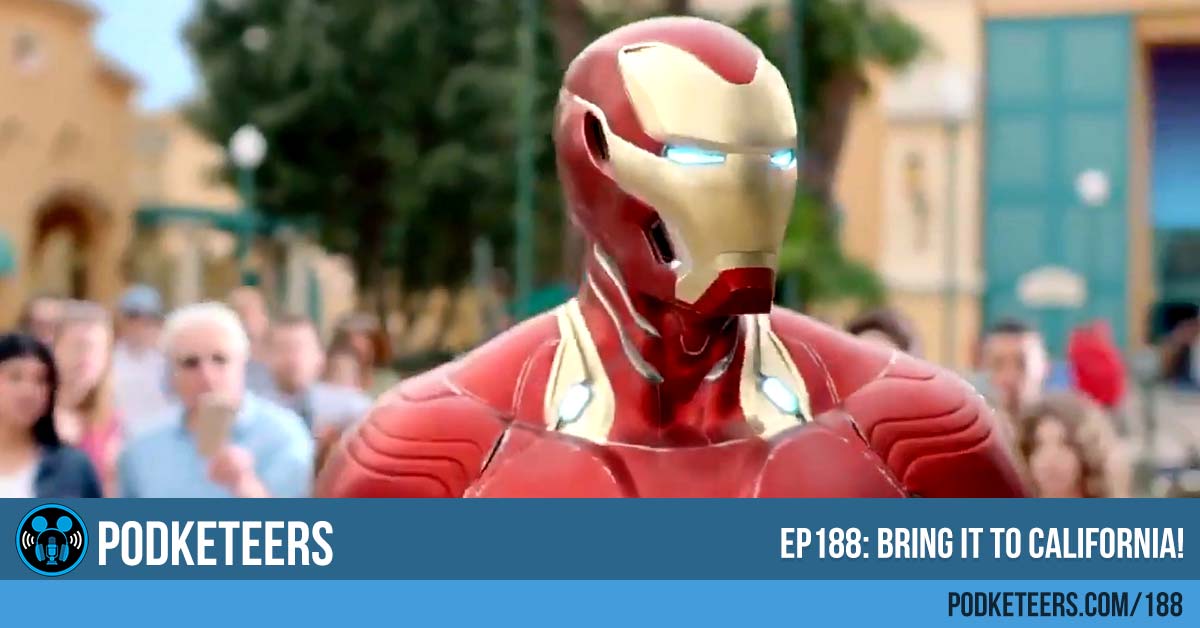 In this episode: This week Melissa, AJ and VJ jump into the co-host chairs to talk about YouTube's new rules, Throwback Night at Disneyland and what we'd like to see next, Black Widow getting her own film, why the Summer of Heroes at Disneyland Paris may drive Heyzen crazy this summer and VJ checks out The Void's 'Star Wars: Secrets of the Empire' immersive experience at Downtown Disney.

Last year Disney California Adventure saw the Summer of Heroes kick off with the opening of Guardians of the Galaxy: Mission Breakout. This year, the heroic celebration continues as the Avengers head to Disneyland Paris to celebrate there. There’s only one problem (at least in Heyzen’s eyes), Iron Man will be at the party. The best(?) thing about Iron Man being there is that it looks like he’ll be wearing his Model Prime Armor. Check out this video:

So, if this IS the Model Prime armor, why is it so cool? Glad you asked.

Think of the Model Prime armor as a Swiss army knife with tons of different configurations and uses. The suit can collapse into the size of a bracelet and when active you control it with your brain. The armor can resist different types of energy blasts and even has a cloaking mechanism. In the comics the Model Prime armor is a result of a 15 year old genius named Riri Williams reverse engineering an old version of the Iron Man armor posting the plans online while building her own. Tony (kinda goes) into hiding and creates the Model 51 armor aka Model Prime. Riri eventually stops a crime and Tony Stark decides that he wants to take her under his wing. Riri not only becomes the first African-American female to wear the Iron Man armor but it also gives birth to her alias, Ironheart.

How much of this will end up in The Avengers: Infinity War is still up in the air but it would be awesome to see the Model Prime armor go up against Thanos. Would you like to see this new armor at California Adventure? Leave us a comment below.

We are so excited to know that The Void’s immersive experience Star Wars: Secrets of the Empire is finally open! VJ had a chance to check it out and says that it’s unlike anything he’s ever done before. The experience is completely virtual reality and you and 3 friends are on a mission disguised as Storm Troopers. Check out the trailer below.

Ticket information and available times for Star Wars: Secrets of the Empire can be found at www.thevoid.com.

Although Throwback night at Disneyland was happening as we were recording, we’re happy to see that it received a very good reaction. Here are some photos we saw people post while at the special event:

We found this video with some of the highlights that made us tempted to head to the next ‘After Dark’ event.

Did you go to the After Dark Disneyland Throwback Night event? Let us know what your experience was like in the comments section down below!

AJ and VJ (aka DisneyFor2)

AJ and VJ are avid Disney fans frequently traveling between Disneyland and Walt Disney World. Under the name DisneyFor2 you can find their vlogs on their YouTube channel chronicling their visits to the parks and their travels.