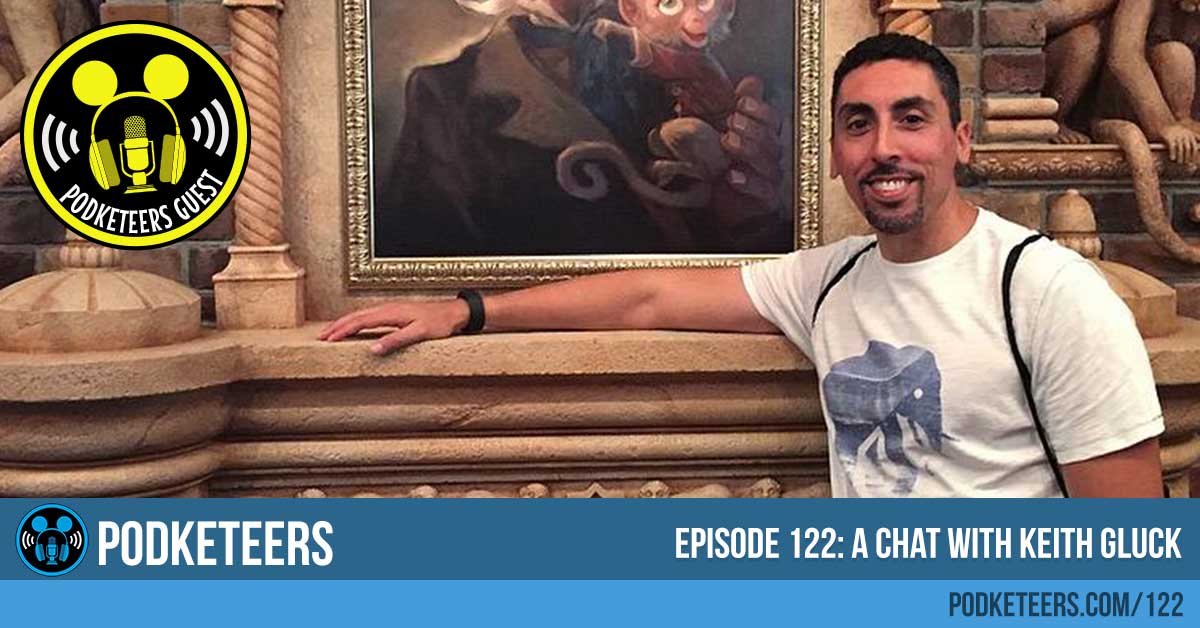 Ep122: A chat with Keith Gluck

In this episode: In this episode we chat with our pal Keith Gluck (The Disney Project) about how his love for writing led him to writing directly for the Walt Disney Family Museum.

We had the pleasure of sitting with our pal, Keith Gluck, for a chat about his writing and how his passion for Disney led to him writing for the Walt Disney Family Museum website. During the chat we talk about an article that Keith wrote this year about whether Walt would have liked Star Wars Land. An excerpt of that article and link to the full article are below:

Growing up in the Bay Area, I wasn’t surrounded by many die-hard Disney fans. Sure I knew people who had been to Disneyland, but don’t we all? Then came something called the internet, and I discovered that I was in fact not the only Disney nerd out there. My mind was blown.

As far back as those earliest of Disney fan communities, debates raged over a myriad of topics. One of the oldest debates is, “Would Walt have liked/wanted this?” It’s a question and a justification that has been used many times as an attempted (and I stress attempted) trump card to win an argument. “Walt would have hated Paradise Pier,” or, “Walt would have loved Mystic Manor.” People say things like this (I’ve even said things like this), and it is always, of course, their opinion. But every now and then we’ll hear a Disney executive use a Walt quote to justify changes, especially the less popular ones. “Walt said Disneyland would never be completed,” said random Disney employee about random project. Well, yeah. But that doesn’t mean Walt would sign off on crap, either. Walt didn’t advocate change for the sake of change. He advocated change for the sake of improvement. [Editor’s note: That doesn’t mean that everything Walt signed off on was great. But what didn’t work he was quick to fix or replace]

Not too long ago on a social media site not that far away, I read…

Another one of the articles mentioned in this episode was an article that Keith wrote for the Walt Disney Family Museum where he talks about Bob Gurr accidentally kidnapped, President (then Vice-President) Richard Nixon. Here’s an excerpt from that article:

January 9, 2013 marks what would be the 100th birthday of former President (and Vice President) Richard M. Nixon. We here at STORYBOARD felt what better way to celebrate than to talk about a fun incident that took place the day he helped dedicate the Monorail.

If you were to ask Disney Imagineering Legend Bob Gurr for his recollections of June 14, 1959, he wouldn’t start by telling you it was a warm, summer Sunday. He would refrain from leading off with the fact that he was wearing a uniform that had been created for him mere hours earlier. And he probably wouldn’t begin by saying how much he was just hoping the Monorail wouldn’t burst into flames that day. No, I believe he would turn to you with all the charm and sincerity that he is known for, smile, and say, “Oh, that would be the day I kidnapped the Vice President of the United States.”

Remember to follow Keith on social media for updates on his book, his articles and updates from his visits to Disney Parks! You can click the ‘Disney Project’ logo below to go to Keith’s website. You can also search @DisneyProject on Instagram and Twitter (or follow him using the icons below).